Secrets of the Scarlet Skirts 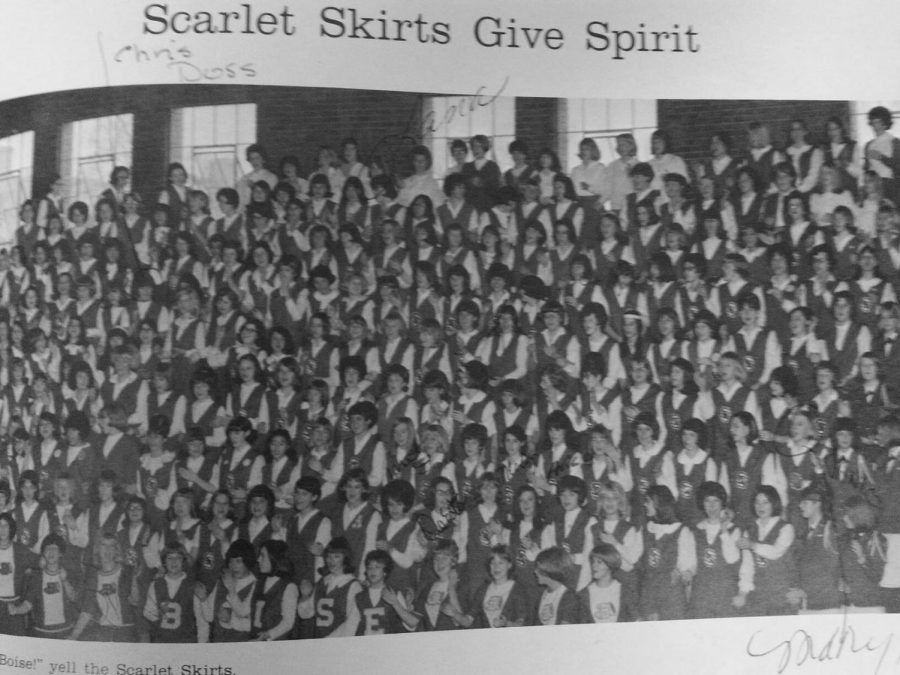 The Scarlet Skirts were more than just clever use of alliteration. They were the heart of school spirit for decades at Boise High, first record beginning in 1932 and last in 1969. They were a pep club, comprised of eager young women in the earlier days of boise high. However, little are remembered about them today. In fact, little can found about them either. They seemed to have disappeared of the face of the earth- or at least Boise High.

The Scarlet Skirts were ambitious high school girls looking to leave their mark on Boise High. Divulging themselves in various community service projects, they helped run “cancer, anti tuberculosis, veterans and crippled children’s drives,” as explained in the 1953 issue of the BHS Courir. They were much more than just a pep club.

When not volunteering their time to the greater Boise community, they were volunteering their time for the BHS community. They took part in the “Decoration of goal posts, manufacturing and selling pom poms and wrist shakers, a new card section, forming a B for Boise Braves.” They also helped to organize school dances, such as the Sweethearts Ball.

The Scarlet Skirts were also an important part of social life inside and outside of Boise High. More prestigious members could become part of the ‘High Point Girls’ by earning points for their service work, and attend exchange teas. Pep clubs of Boise, Nampa and Caldwell would meet for exchange teas and share high school cultures with one another. While this is portrayed as a high honor in the ‘53 BHS annual, Hill has no recollection of the high point girls.

“We were THE pep club,” she says, “We wore a red skirt on game day and for events,” Hill recalls with a flash of nostalgia falling across her face. She is referring to the iconic ‘costume’ of the scarlet skirts. They consisted of the famous ‘scarlet skirt’, and varied the top- in the ‘53 and ‘54 year book pictures, they are sporting white sweaters with and double ‘s’ logo. In Hill’s ‘66 yearbook picture, the scarlet skirts are paired with what appears to be white cardigans and dark colored vests.

Members of the Skirts carried the lessons they learned during their high school years with them all their lives. They gained volunteer experience, responsibility and most importantly, friendship. “My take away from SS is life long friendships,” says Hill.

During a time where male sports dominated high schools, the Scarlet Skirts and later the Girls’ League gave the young women of Boise High a chance to become involved. Organizing student sections and advocating school spirit are practices all students can participate in today, men and women, sports players and sports fans alike. The Scarlet Skirts may have disappeared from written records, save the Courir, but they will live on in the spirit of the many up and coming young women, other pep groups and the overall school spirit of BHS.