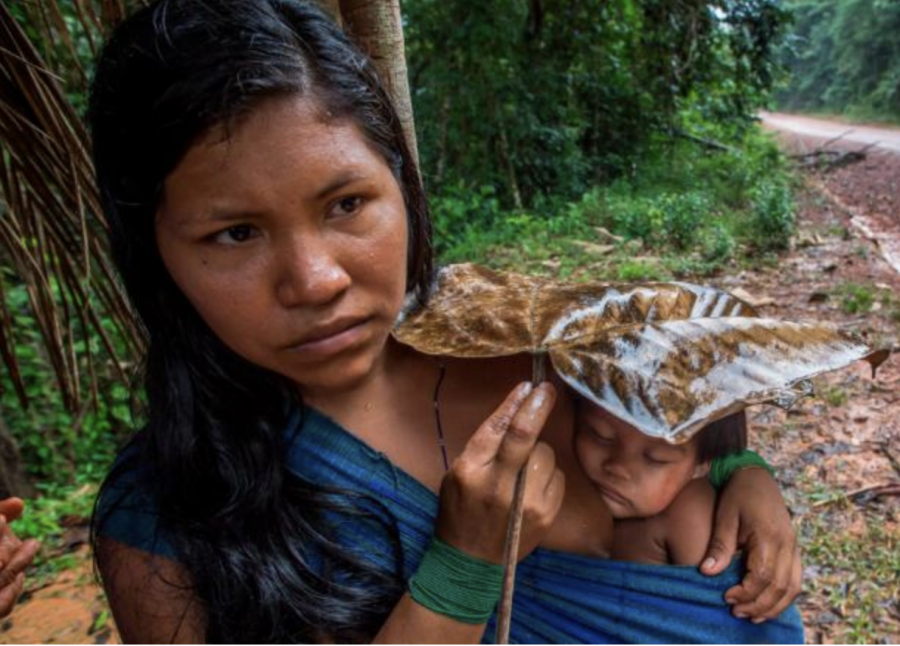 A prime example of indigenous people’s dependence on the Amazon as Karuwaniru Waiapi, from the Waiapi tribe, shields her son from the rain using a leaf.

Over 80,000 wildfires have ravaged Brazil’s forests since the beginning of 2019, at least 26,000 of these documented in the Amazon rainforest this past month. Tracked by INPE’s (Brazilian Space Agency ) Aqua satellite, deforestation outbreaks steadily rose in conjunction with the 82% increase in forest fires compared to 2018.

As an exchange student from Brazil, Camila Ilges shared her views on the tragic burnings taking place at home.

“The Amazon is our biggest treasure because 60% of it is located in Brazil…and is the home of uncountable species…” Ilges said, devastated that the rainforest back home continues to burn at an uncontrollable rate. She is especially disappointed in the Brazilian government for the lack of support and action taken to reduce forest fires, including the accelerating loss of Amazonian terrain.

Spanning 2,300,000 square miles, the Amazon rainforest houses up to 40,000 plant species and hundreds of animals, all at risk of succumbing to the ever increasing fires. While the forest has been experiencing wildfires since January, the severity of destruction notably escalated on August 19th, 2019, where an enormous black cloud hovered over Sao Paulo.

The Amazon is “…one of Earth’s last refuges for jaguars, harpy eagles and pink dolphins,” the World Wildlife Fund (WWF) wrote, outlining the ecosystem with the largest scale of biodiversity on the planet. Unfortunately, food sources and habitats will dwindle as deforestation continues, forcing species such as the macaw to flee and escape their once suitable environment, while those unable to leave are left to cope in whatever ways they can.

Indigenous people also depend on the resources provided by the rainforest to survive. Though these tribal communities have long been subjected to unrestrained logging, mining, and farming – threatening their peaceful way of life – infrastructure projects in the form of illegal removal of trees drastically increased since President Jair Bolsonaro.

Bolsonaro intends to hurdle Brazil’s economy forward as a developing country by utilizing Amazonian land’s resources. The president has received harsh criticization and backlash as his intentions to preserve the Amazon are questioned. Bolsonaro has since rejected millions of dollars worth of aid from European nations to fight back against the wildfires, tweeting his displeasure at the blatantly offered assistance, “as if we were a colony or a no-man’s land.”

However, Bolsonaro did issue a two month ban on burning any forests in Brazil starting in September, as well as promised to “…direct the military to enforce environmental laws and to help contain the fires,” according to the New York Times. Despite this effort, Amazon tribes are still experiencing land seizures from unlicensed farmers.

“The future of the next generations depends on the Amazon’s health.” Ilges concluded, whether it be the plants and animals, the indigenous peoples, or the pride Brazilians take in their sovereignty to the rainforest. Regardless, as acre after acre of forest perishes beneath the raging, man-made flames with no concrete plan to ward them off, the question of how well the Amazon can recover from this extensive deforestation remains uncertain.