Under the Building and Through the Tunnels: Down to the Basement We Go 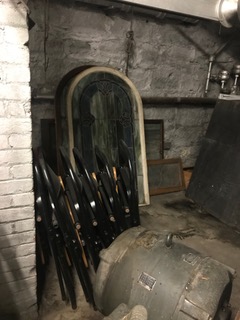 The stain glass windows and coal furnaces, sealed away in the basement. (McKenna Johnson)

Unbeknownst to most students, much of the basement is locked away out of student reach– and for good reason. I got the chance to take an impromptu behind the scenes tour of some of Boise High’s secret underground locations. As Mr. Thompson and Ms. Fossceco lead me through a series of certain undisclosed tunnels hidden below our school, a shiver ran through my spine. Mr. Thompson assured me that there have never been any issues or concerns surrounding the basement foundation. The tunnels may not be the most welcoming, but they are full of rich history.

First, Mr. Thompson tells me about a new project in the works right now, relating to our new mascot, The Brave. The current archive room is -hopefully- to be relocated into a museum like space, preserving our history but also teaching past, current and future generations about what is means to be Brave. “We’re going to turn (it) into a kind of living museum,” he says, “And teaching center, which will have a progression and display area for educational purposes, regarding cultural appropriation…this is just the tip of the iceberg.”

Diving further down into the basement, I am brought next to a large fan that used to circulate air through the school. “This is the old original heat fan pump for the building, it was a big fan that had a big pulley,” Mr. Thompson says, beaming up at the old fan. “This is part of the old geothermal steam situation. This is all just to heat and cool the building, and this is only about half of it.” With more storage space came even more artifacts, such as a set of beautiful and historical stain glass windows. Sealed away but never forgotten, Thompson hints towards plans to soon display the beautiful old windows. “Those windows right there are part of the original stained glass from the auditorium, and the old industrial arts building that was torn down in 1995. I’m gonna put those in the archives…they’re neat, aren’t they?” He tells me, admiring the glass. Just past the windows are a case of old wooden stairs, leading nowhere up to the ceiling. As I stared on in wonder, I am told the tiny storage room I am looking at used to be a classroom.

Finally, I am brought to one of the coolest and most creepy corners inside the tunnels under our school. “Down in the depths of Boise High,” Ms. Fossceco adds with a laugh. The depths in question are where large broilers fed with coal furnaces were used to heat the halls of Boise High from 1912 to 1972. The furnaces are similar models, in fact, to the furnaces on the famous British passenger liner, RMS Titanic. “This is the closest existing replica to the model of coal fire heat that was used on the Titanic,” Thompson says, “and so when they filmed the movie, they actually used images from ours.”

Past the old boilers is a little square door leading to where 24 hour custodians would receive coal shipments for the furnaces. Tucked behind the boilers is a little custodian closet, with an old cracked sink and dented locker still intact after all these years.  “Back here, was an old custodial area, because they used to have to have custodians here 24 hours. So one would sleep here and get up every couple hours and put coal in (the fireplaces).”

The basement of Boise High may be locked away, hidden in plain sight, but it hides many secrets full of BHS’s rich history. Hopefully with the living museum in the works, students will be able to once again venture into the belly of Boise High to see that history for themselves.