Psychopaths: Behind the Scenes and Into the Brain 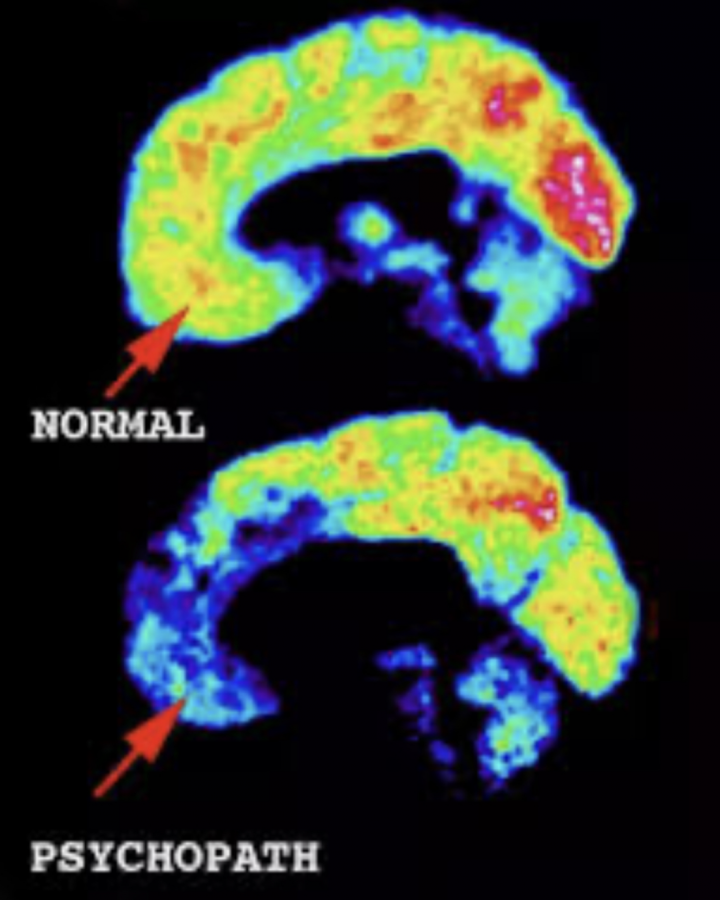 a comparison of the psychopathic brain next to a normal one

What do you first think of when you hear the word ‘psychopath?’ Our minds probably go straight to serial killers, or our favorite horror movie; but taking a deeper look into the mind of a psychopath reveals much more than that.

The definition of sociopath and psychopath are commonly mismatched but the discrepancy between the two is essential to understand. According to the article, “What is the Difference Between Sociopaths and Psychopaths?” by Alex Burgemeester, the two are broken down into acute detail. “Research appears to show that there is a genetic component to psychopathy that is to say there is a biological basis,” he says. “Specifically in the brain where there is underdevelopment or loss of mass in the amygdala region of the brain.  This is the area responsible for impulse control and emotions.” Furthermore, in psychopathy we can actually see that there is a biological component, as opposed to sociopathy which Burgemeester describes.“Sociopathy appears to be learned rather than innate. Sociopaths are capable of empathy in certain limited circumstances…” Burgemeester wrote. In other words, sociopathy is gained through nurture as opposed to nature, such as childhood trauma, abuse, etc. Sociopaths are capable of having empathy but only for certain and few individuals. Though both are different, both are still described with similar adjectives from cunning and devious to manipulative and charming.

Psychopaths are known to be born with a lack of empathy and no real emotions. What is unknown, is that this can actually be visible in brain scans.In the article, “A Neuroscientist Uncovers A Dark Secret” by Barbara Bradley Hagerty, there are multiple topics including the difference between a “normal” human brain as opposed to the brain of a psychopath. She elaborates by comparing two brain scans, “The orbital cortex puts a brake on another part of the brain called the amygdala.” Furthermore, the amygdala controls your moral decision-making, ethical behavior, and impulse control, less activity as shown below causes you to be more free-wheeling and carefree.

Now understanding of the basic inner workings of a psychopath, one can learn how to spot one with a checklist of common psychopathic tendencies and habitual acts. The psychopath checklist was first created in the 1970’s by Robert Hare, a researcher that spent three decades studying the concept of a psychopath. The original checklist contains sixteen factors but was later revised with twenty items on the list, made up of the following: glib and superficial charm, grandiose (exaggeratedly high) estimation of self, need for stimulation, pathological lying, cunning and manipulativeness, lack of remorse or guilt, shallow affect (superficial emotional responsiveness), callousness and lack of empathy, parasitic lifestyle, poor behavioral controls, sexual promiscuity, early behavior problems, lack of realistic long-term goals, impulsivity, irresponsibility, and failure to accept responsibility for own actions.

As expressed, psychopathy is a wide and very broad topic, but by understanding the basic topics involved, we can learn more of the truth about psychopaths, and go behind the scenes; even going as far as seeing into the brain of a psychopath.