A New Era for Freak Allyey 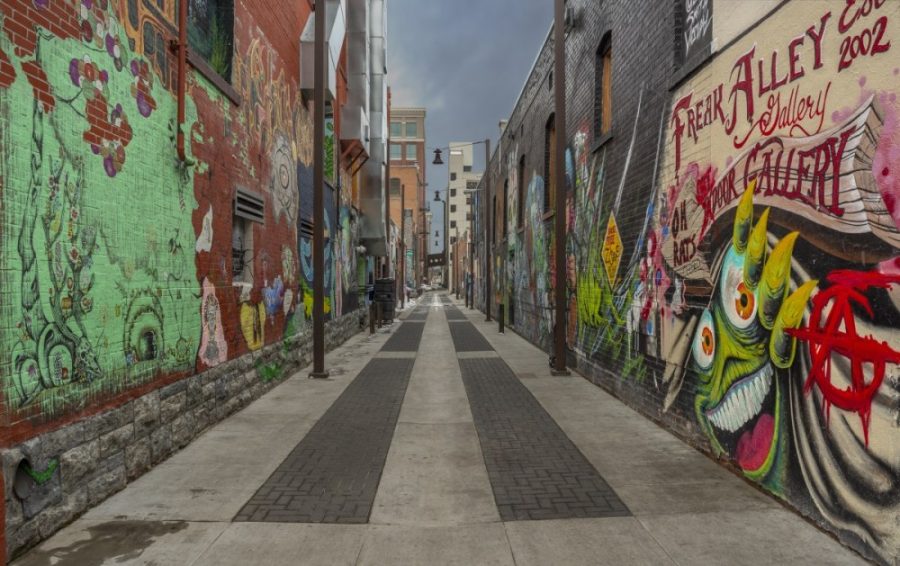 Freak Alley is one of the most iconic features of Downtown Boise. We’ve all seen it, the incredible murals and paintings lining the walls of the alley behind Even Stevens. The collage of colours and lines, overlapping to form the largest outdoor gallery in the entire Northwest. And the best thing about it: it’s always changing.

Every year, in August, the alley gets a new paint job, but this year, things are going to change again.

Freak Alley started off in 2002 when an artist named Colby Akers had the opportunity to paint the back of Moon’s Cafe. Other neighboring businesses saw his artwork and wanted him to extend it to cover their walls too.

After some time, people started changing the artwork or incorporating it into new pieces, and now, 17 years later, Freak Alley is an incredible, ever-evolving piece of art.

However, after starting and running Idaho’s most well known art attraction for over 17 years, Colby Akers is taking his leave. In his place as the head of operations will be Melissa Nodzu, a small business and agricultural entrepreneur who’s been living in Boise ever since she attended Boise State in 1991. She’s also the former Director of Events for Destination  Caldwell, a nonprofit organization that focuses on revitalizing downtown Caldwell.

Nodzu says she is excited to commence her leadership of the gallery, but doesn’t plan on changing much. The current system has been working for 17 years, and there’s no need to do anything different.

One of the things she does want to do, however, is to continue growing Freak Alley. Currently she is working on expanding the board of directors, launching a new website, and addressing the structures and policies for the organization. She is also pursuing new sponsorships and trying to find other sources of funding.

Freak Alley has always been a non-profit, and board members as well as volunteers work for free, but donations from outside sources will definitely help to keep the alley maintained. Anyone with a paintbrush can contribute; they rely solely on donations and volunteer work.

Freak Alley also welcomes any artist. All one has to do is send an email and get accepted to be able to add their touch to the gallery.

Freak Alley’s board of directors also plans to add to the current gallery space by creating Freak Alley East, a place where participating artists will be able to display their pieces for a longer period than just a year.

These works will be available to admire for between three and five years. While the wall will receive a new paint job next year, some pieces are slated to remain, like the popular Martin Luther King Junior and Jimi Hendrix paintings.

Even though there will be little visible updates to the Alley this year, they are working hard behind the scenes. The people in charge are planning changes to make Freak Alley more popular, well known, and more beautiful. They plan to give aspiring artists more opportunity to display their paintings, and give experienced artists more time on the wall. While it has been a big part of Boise for the past seventeen years, they envision it even bigger, so keep your eyes peeled in the future for some changes.