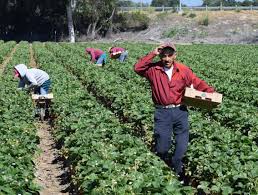 Idaho’s solution for a shortage in fieldhands is to supply farmers with the labour of the incarcerated. (The Spokesman-Review)

Potatoes are our identity in the state of Idaho. We’re known across the country for the crop, and it’s our 2nd biggest industry. We never really question where our potatoes come from however. As we drive east, we can catch a glimpse of the fields where the staple crop is grown, but how is it processed, who exactly works in the fields, and how it gets to us is, for the most part, a mystery.

Most of us imagine a picture-perfect family farm with rows of green potato plants when we think of the source of the famous Idaho potatoes. However, the reality is much darker. Many of the workers that previously were fine working labor-intensive, low wage jobs are no longer so sure about their choice in profession. The lack of farmhands has become so extreme, in fact, that companies have started using Idaho’s incarcerated as a new means of production.

For the past few years, the Idaho Department of Corrections (IDOC) has been working with numerous companies in order to fill some of those empty slots. The prisoners are working the fields, sorting, and packing the potatoes into the bags that you can get from your local Albertsons. Though no potato companies would go on record to confirm their involvement with the prison’s work-release programs, public record shows that SunGlo of Idaho Inc., Walters Produce Inc., High Country Potato Inc., and Floyd Wilcox & Sons Inc. all have contracts with the state’s Department of Corrections.

This isn’t exclusive to Idaho, however. Farms and companies across the country are struggling to find enough workers to be able to turn a profit, and prison labor seems to have become the primary solution. In California, prisoners work in the textile industry, and in Kentucky, they sell millions of dollars worth of cattle.

The amount of money they get to keep from their efforts is another issue. These programs have been painted as reintroduction programs, to help the incarcerated get ready to find a job once released, but they are more the exception than the rule. Most inmates work for nothing or almost nothing, and the work they do is unlikely to help them find a sustainable job in the future. At the federal level, the Bureau of Prisons operates a program known as Federal Prison Industries that pays inmates roughly $0.90 an hour to produce everything from mattresses, road signs, and body armour for other government agencies, earning $500m in sales in 2016.

At the state level, similar arrangements exist as well, especially in Idaho. The market of captive laborers in the US is worth over a billion dollars, with 61 thousand workers in total. Keep in mind, none of this is illegal, but is it ethical? The next time you order some fries or open a bag of Lays, think about the people who made these products possible and the small potatoes they get paid for what they do.