Boots on the Ground No More, the Newest Threat is Cyber War 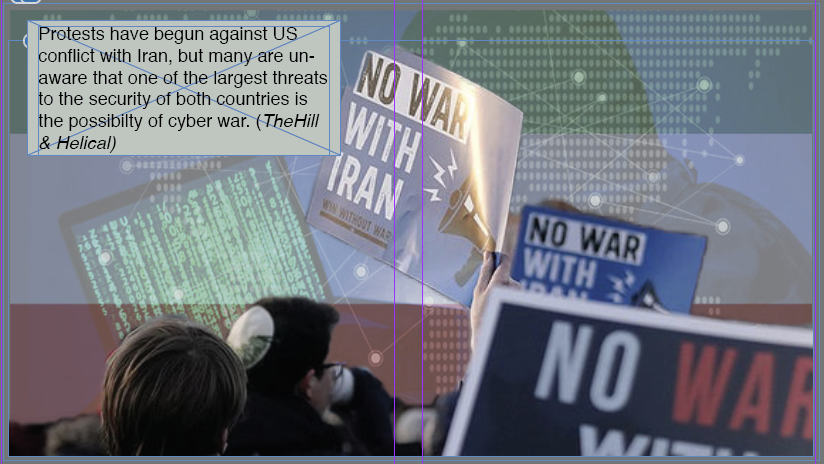 The assassination of Qassem Soleimani on January 3rd led to a quick response by the Iranian government. The threat of retaliatory acts in the physical realm was met by threats of cyberwar attacks. The bombing of U.S. military bases in Iraq on January 8th added weight to these materializing threats. Threats that are predicted to intensify as the issue persists.

An attack on The Federal Depository Library Program website occurred on January 5th by hackers that claimed to be working for the Iranian government. This attack may be an indication of an increasingly escalated cyber relationship between the United States and Iran. It may also serve as an insight into the future of military operations as a whole. The future of the military is proving itself to be more and more digitally focused.

The origin story of cyberwar involves the two countries feuding in the current. Stuxnet operations were the U.S. and Israeli digital espionage and offensive cyber operations that aimed to infiltrate Iranian infrastructure. The development of this project began in 2005 and it was released in 2010. The purpose was to temporarily halt the concerning and growing Iranian nuclear program.

Natanz Nuclear Enrichment plant, a major nuclear center, had centrifuges that were damaged by U.S. engineered malware. The actual effectiveness of Stuxnet in halting Iranian nuclear power is disputed to this day. The program was likely only set back fewer than three months despite the millions of dollars the U.S. and Israel spent on the project.

What wasn’t expected was how the Iranian government seized this technology and made it their own. This malware was reverse-engineered by Iranian forces and used to attack its adversaries on the digital domain.

This started the digital arms race and creation of crippling technology that is growing in capability. Countries are investing in infiltration technology that would allow them to hack into the power grids of other nations as well as leak personal information about a country’s citizens. Escalating national tensions between superpowers like the U.S., China, Russia, and Iran mean that the threat of cyber attacks is higher. A growing percent of military budgets are being devoted to the matter.

Digital warfare may be a preferable alternative to kinetic warfare, where civilian risk and collateral damage is nearly unavoidable. Keeping war on the digital domain may be an effective way to save lives. But simultaneously the biggest issue with cyberwar is the unknown. The relatively new domain of military operations hasn’t been tested enough in a real-life application for the full list of consequences to be unveiled yet. Digital attacks that run over civilian internet domains may mean a new type of collateral damage and one that may be even more impactful depending on the sensitivity and value of digital information that is subsequently hit.

It is certain that countries are shifting their focus away from the boots on the ground military approach to one that seems more apt in an age where digital reigns king. The consequences of this switch will be made history in this new decade.