Gun Control, Racism, and the History of Black Gun Ownership in the USA 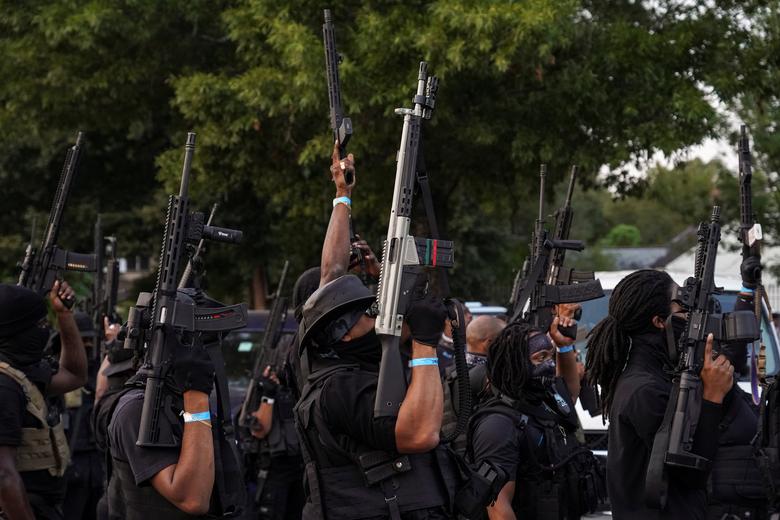 NFAC members march through the streets of Lafayette, Louisiana during an armed rally. (REUTERS/Go Nakamura)

One of Joe Biden’s primary concerns coming into the White House was gun control. His press secretary Jen Psaki spoke about it as a priority and said that the President would “not be afraid” to stand up to the NRA. On the surface, this may seem like a constructive plan, as gun control can lead to less gun violence. However, as we walk back in history, we see how gun laws have routinely and systematically been used to keep Black and Indigenous people from arming themselves, and how these practices still permeate our societal fabric to this day.

In the early years after the 13th amendment, what were then called ‘Black Codes’ prevented newly freed Black people from even obtaining a firearm, using the argument that they were not citizens, and therefore not entitled to the right to bear arms. As the years passed, Black communities in Delaware, Maryland, Florida, Virginia, and other states faced race-based total gun bans, while in other states, Black households were routinely the subject of raids and home searches that confiscated all weapons, legal and illegal.

Towards the end of the 1800s, while Black people were starting to become citizens, states passed a law called the ‘Saturday Night Special,’ permitting only the purchase of expensive, military-grade firearms, most of which were already owned by Whites, who refused to sell to the Black people who could afford it. In the early 1900s, states started passing total bans on handgun sales, except to police officers and sheriffs, many of whom were members of the KKK. In New York in 1911, the Sullivan Law required prospective gun owners to obtain a permit from the local police, effectively giving the officers final say in who owned a gun and who didn’t.

In 1968, the infamous Gun Control Act of 1968 was passed, which, according to journalist Robert Sherrill, “was passed not to control guns but to control blacks.” [R. Sherrill, The Saturday Night Special, p. 280 (1972).] This was the act that the NRA famously supported in response to the Black Panther Party promoting Black gun ownership (via Steve Ekwall, The Racist Origins of US Gun Control).

The 80s and 90s represented a turning point in the targeted attacks on Black gun ownership. State governments began introducing gun bans based on wealth, singling out poorer citizens. Firearm bans in public housing, which were mostly occupied by Black people, became increasingly common. These new developments in gun control were the blueprint for the anti-gun legislation of today.

A result of this ugly history is the stigma that has formed around Black gun ownership. White American society has created this stereotypical caricature for a Black person with a gun, which does not leave room for the prospect of legal ownership. While White people with guns are seen as protectors, defending their families and communities from the savage unknown, Black gun-owners are often characterized as thugs, gangbangers, and many other demeaning and defamatory labels. Black people are already seen as a threat in our society, even without guns, so Black people with legally-owned firearms disrupt every preconceived notion White people typically have towards them.

Now, groups like NFAC, a Black Nationalist organization founded in the south, are working to educate Black people, young and old, on firearms, firearm safety, and their constitutional rights. NFAC is self stylized as a Black militia and commanded by a man named John Fitzgerald Johnson, who is known as Grand Master Jay within the organization. He states that one of the missions of the group is to become as well organized, disciplined, well-armed, and determined as any standing national army (via SkyNews interview in September). It seems as though NFAC has become a contemporary Black Panther Party, with better discipline and more arms.

Even groups like the National African American Gun Association are starting to gain popularity, despite the recent push for gun control in this country. With over 30,000 members, it is the largest Black gun association in America and one of the largest gun advocacy groups in general. Unlike NFAC, their only goal is “to have every African American introduced to firearm use for home protection, competitive shooting, and outdoor recreational activities.” They are not a group aimed at Black Liberation or Black Separatism, their main focus is on self-defense.

Both groups are equally legal, and equally motivated, but take drastically different approaches in accomplishing their missions. In the end, however, they maintain a common goal, fighting the White establishment for the right to maintain their firearms as granted to them by the second amendment.