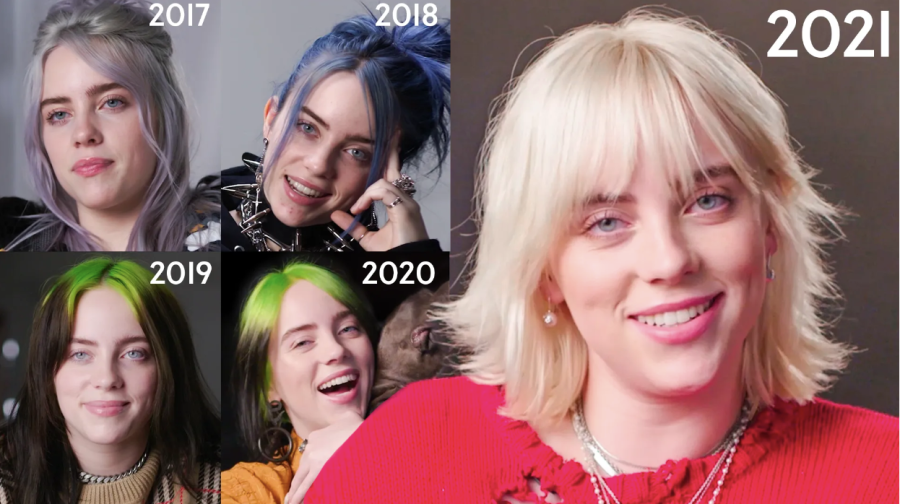 Billie Eilish through the years (vanityfair.com).

Billie Eilish consistently creates inventive and unique music, spurring her to have fans throughout all walks of life. I personally am not a superfan of Billie Eilish, but I’m definitely a first-rate supporter of her music. Not only has Billie Eilish’s hair changed significantly, but so has her music. P.S., I think that Billie Eilish’s teal and lavender hair was the most luscious hair ever.

The song Ocean Eyes (2015) is the first song Billie Eilish ever released, and it’s one of my favorites. It’s about being in a toxic relationship and being drawn into someone’s ‘ocean eyes,’ where you can’t help falling for someone even when they are bad for you. I can almost feel the pain in her velvety voice, and it makes you hurt so good. I give it a 9/10.

Six Feet Under (2016) is one of my favorite songs of all time because of its ethereal sound and deep lyrics. The song represents having an ex-lover and being unable to let go of your feelings for them. My heart always feels really heavy whenever I listen to Six Feet Under. Therefore this song is a perfect 10/10.

Billie Eilish’s hit song ​​idontwannabeyouanymore (2017) is famous for a reason. I love the way she vibrates her voice in the beginning and how the melody is very somber. The song is very painful and often relatable because it’s about self-hatred and struggling to accept yourself. This song deserves a 9.5/10.

Lovely (2018) is the first Billie Eilish song I really fell in love with. It features Khalid, who is equally as amazing as Billie. The combination of both of their feathery and anguished voices makes my ears feel happy. I think that this song is about struggling with depression. A solid 10/10.

I Love You (2019) is my favorite Billie Eilish song because it’s so beautiful in a bittersweet way. To me, it reflects someone falling in love, but struggling with their feelings. It strikes a chord, and this song is also a 10/10.

I personally think that ilomilo (2020) is one of Billie Eilish’s worst songs. It’s just not very appealing to my ears with the unusual melodies and beats. However, the inspiration behind ilomilo is fascinating. According to Billie, ilomilo is a video game about two characters being separated and reuniting. The song uses sound effects from the game which is awesome though. This song is a 5/10.

The beginning of Happier Than Ever (2021) song sounds like an old person song, but then the song transforms into an angsty, more relatable vibe. I thought it was really cool that Billie did this because it surprised everyone when the song’s mood suddenly changed. Happier Than Ever reflects how she has really grown and become happier over the years, and she’s beginning to love herself and leave behind old heartbreaks. It spreads a very positive message to me. I give it an 8/10.

I’m not going to lie, I wish I could review every single Billie Eilish song because most of them are so good, and Billie almost always has a deep and important message. I really love her songs between 2015 and 2018, but her songs later on are still good, just not nearly as soothing as her old songs. Nevertheless, Billie’s songs are meaningful and make me feel better whenever I listen to them.