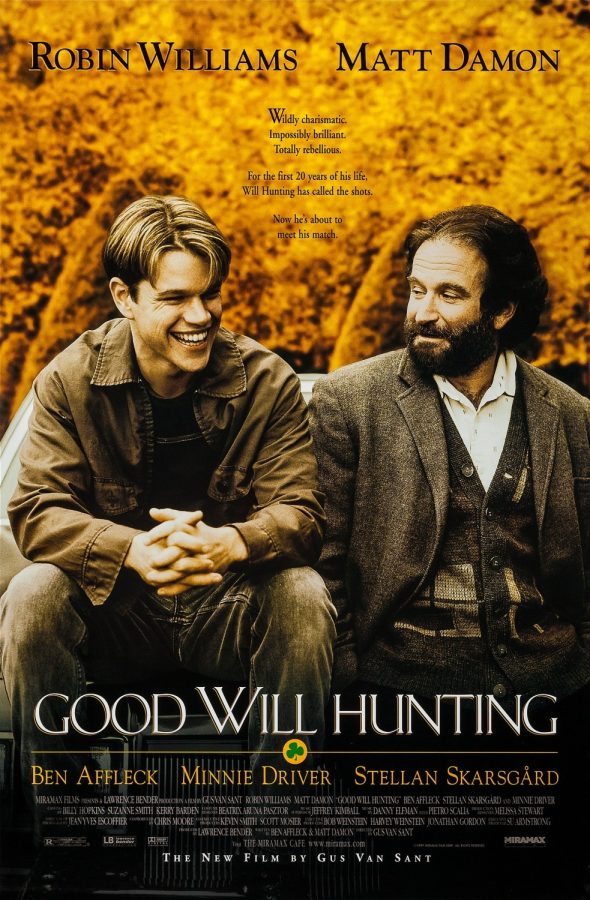 The poster for Good Will Hunting. (©1997 Miramax Films)

After taking a look at albums on the “25 Years Later” series (including Either/Or and OK Computer) and the numerous other albums I’ve reviewed (Gorillaz, Nevermind, 30), I think it’s time for a change of media. Instead of an album this time, I’m going to review a movie many look fondly towards: Good Will Hunting. This film was released 25 years ago in 1997 to commercial and critical success. But does the film stand the test of time?

The movie is about Will Hunting (played by Matt Damon), a janitor at MIT who is a natural genius. After solving extremely difficult problems anonymously, his talents are discovered by Professor Lambeau (Stellan Skarsgård), who tries to help Will reach his full potential by arranging therapy appointments with his college roommate Dr. Sean Maguire (Robin Williams).

The plot is well-written, giving each character included within the story depth and a purpose. The characters were made even better by the stellar performances given by the cast, particularly Matt Damon and Robin Williams. I believe the chemistry between these two actors to be one of the primary reasons for the film’s legendary status. The dialogue combined with the acting makes for a movie that is realistic.

The soundtrack is excellent as well, containing original pieces by both Danny Elfman and Elliott Smith. It also uses many songs from Smith’s discography up until that point, like “No Name No. 3” from Roman Candle and “Say Yes” from Either/Or. These tracks are great and fit the general mood of the film with their melancholic, sarcastic, yet somewhat-hopeful performances.

Good Will Hunting is definitely one of the best movies out of 1997 for its well-written characters, great writing, and sublime soundtrack. It stands the test of time, and has aged considerably well for its message of pursuing a life of love, faith, and trust over one strictly of knowledge and education. I highly recommend this film to anyone who hasn’t already seen it.